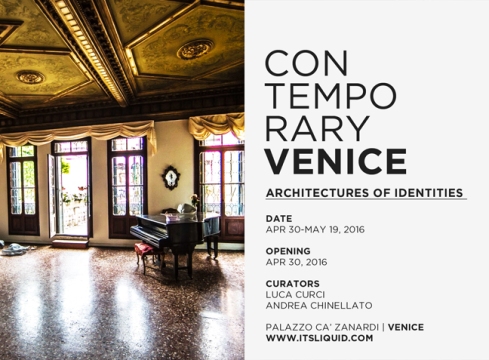 Three months ago I performed Girl in Suitcase in Venice, in a new twenty minute version, in Italian. That was the maximum length for a performance at the Architectures of Identities – Contemporary Venice exhibition opening. At about a sixth of its original duration, this was an exercise in condensing and compacting the essence of the piece.

The opening scene of emerging from the suitcase and becoming unbandaged, introducing myself as a character – this was mostly unchanged except that I brought back the music I had played for this scene in the version of 2015; Sanvean by Lisa Gerrard. And, I spoke in Italian. I had asked two Italian friends in London to translate the text and advise on pronunciation. The words themselves speak a little of my background, born in a place where women have rights and are basically mostly free…

In the second scene I dressed up in the most revealing G-string, a pair of red stilettoes and lipstick. Lydia Lunch’s Smoke in the Shadow played, I struck a quick pose, then as music faded I read ‘the news’ as it had been in Telegraph Hill a month before, naturally in Italian. Statistics for rape, honour killings, FGM around the world present the idea that my personal bubble of relative gender equality is far from representative globally, or even the end of the story in more equal societies. During my listing of attrocities against women, Steve came on stage to remove my clothes and appear menacing with a rope and knife. This act did not last long before I told him to get lost – a reminder of cosier power relations!

Now naked once more and holding a kitchen knife aloft, I delivered what I call ‘the crashing through the universe’ monologue. It’s about how women have power that men have suppressed and which will eventually explode as they ought to be – crashing through the universe! (Commanding their own journey). This heralds the way toward my own self-direction, stylistically in that I now create a movement pose. I performed to Patti Smith’s Free Money last time, which has a wonderful build-up. I enjoyed beginning extremely slowly, and becoming increasingly wild, expansive and free (see video here).

With Steve by my feet I then poured some of my menstrual blood on to my body – a recent batch. Not as expressively bloody as in Telegraph Hill as I had been warned about not staining the floor of the 14th century palace that is Ca’ Zanarde. I posed, some people drew; it is my familiar message of removing taboo from menstruation. The music was Sufjan Stevens’ You are the Blood. 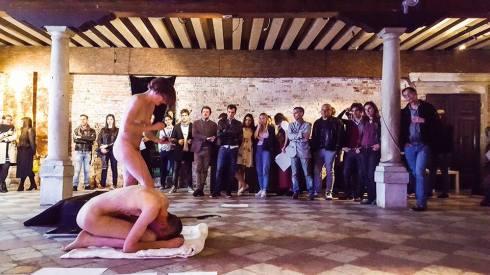 Finally the body painting scene for which Steve became intermediary, offering brush to audience, with pots of coloured paint. They were not so willing or keen as UK audiences have been, perhaps a cultural difference with regard to participatory theatre, or maybe put off by presence of blood. Still a few marks were made and this happened to The Song of the Butterfly by Istvan Sky and friends.

More so than drawing me, actually marking my body represents and is the closest connection I have with the people watching. They make a physical impression on me having already seen me perform some quite intimate acts – becoming naked, delivering revealing words about myself, actions pertaining to my personal life, moving freely naked, and removing my mooncup.

Some lovely drawings were created by the audience but unfortunately I did not get to speak much with them after the show, as there was much cleaning up to do. My performance the ultimate of the evening, I missed the chance to socialise as by the time I’d tidied away and washed, it was alas time to leave. Nevertheless it had gone well, I was very happy with what I had done, and the audience though new to my unusual offering, had gone with it and received me well. The space though darkly lit had much character and was a pleasure to perform in. It’s Liquid are the organisation who invited me and they were very welcoming and accommodating. Before me, Glynis had performed and had even asked me and Steve to assist her with her piece, called Mobile. We got to perform naked twice in that evening! In a triad we each moved a frame slowly across our bodies while a projection showed a previous performance Glynis had made of Mobile, with several women. 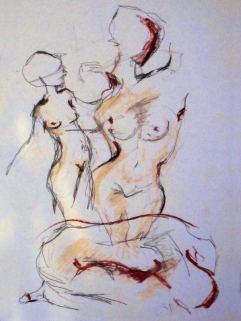 Tomorrow Steve and I will return to Venice, and I will perform the piece again (on Thursday 4th, this time at the Venice Art House) though with a few amendments, at the Fragmented Identities opening. I have cut out ‘the news’ and replaced it with a visual sequence depicting the fall of a very flirty woman. She flaunts, seduces, performs her own femininity in a manner easily recognised within western culture. She becomes worn out and the props of her image let her down, render her ugly, broken. This is not a comment on women who enjoy wearing stilettoes (which includes myself on occasion) or sleeping around. It’s about feeling like you have to behave a certain way in order to get the attention you want. Maybe it’s to make a living. My point of reference was working as a hostess in Soho clip joints as a teenager. It was curious for a while, but that whole scene can wear a person down for the relentless and brutal commercialism. In the show, the fall was important to create an arc (a bit like life too).

After this scene I decided to simplify the rest of the show, blending it into one scene of just over 11 minutes, to more of the beautiful Song of the Butterfly track. (I discovered this track when couchsurfing in Portugal last year a young woman from Slovenia played it to me). A little monologue; me approaching the audience to be marked – this time just in black; bloodening myself; dancing and finally returning to my case – a detail missed out last time.

Steve is no longer in the show, there are fewer spoken words, and the audience will not be drawing on my account. Of course they are welcome to, but I have removed that element with regard to providing materials, as carrying them up and down the many bridges of Venice was, a bridge too far!

I very much look forward to returning and am extremely grateful to Steve for all his help, and to Glynis without whom I would not know of these Venetian opportunities. It has been marvelous to make friends with another female performance artist who works so much with her own and others’ bodies, and has such a wealth of international experience.